Note: These comments reflect the state of my knowledge about Newport at the beginning of my project. I'm learning more now and am not quite sure everything here will continue to be my best understanding of the subject.


Note II: Please note that I no longer believe that Zingo Stevens and Pompe Stevens were the same person. I will post a longer paper detailing my reasoning on this matter soon (Jan. 2009). I am leaving this post up without editing its text because it shows the evolution of my thinking on this project, but please do not use this post as a source to establish evidence for conflating Zingo Stevens with Pompe Stevens. They are two different people, as I will show in my longer work.

The stonecarvers of eighteenth-century Newport are among New England's most celebrated. John Bull and the Stevens family supplied the wealthy merchant's of Rhode Island with exquisite gravestones that rival Boston's best. The John Stevens shop is one of the longest continuously operating businesses in the United States — it opened in 1705 and its artisans are responsible for the lettering on many buildings and memorials, including the National WWII Memorial.

But there was another carver in Newport, one whose work has often gone unacknowledged. His name was Zingo Stevens, sometimes known as Pompe, and he was John Stevens' slave.

We know that Zingo Stevens was a stone carver because he told us so. A stone dedicated to his brother, Cuffe, reads,"this Stone was cut by Pompe Stevens in Memory of his brother Cuffe Gibbs who died Dec. 27th 1768 aged -- Years" (note: Stevens was known as "Pompe" while he was a slave, but reverted to his birth name, Zingo, as a free man after the Revolutionary War). 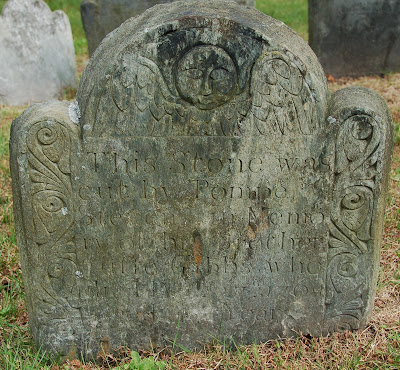 There are a few important things to notice about this stone. First, it is obviously not in the best condition. It is made of a rough slate with many inclusions — not the most expensive stone. Second, the tympanum design is roughly carved by someone who appears to have been uncomfortable with the facial details that distinguish Stevens shop stones. Third, the letters are competently, but somewhat hesitantly, cut. Fourth, the border designs are top notch.

What does this mean? Most importantly, it means that Zingo was responsible for some of the carving attributed to the Stevens shop. This can hardly have been the only stone he ever cut, though it is the only one explicitly attributed to him.

But what, exactly, did Zingo Stevens carve, and what does that mean for interpreting the Stevens shop's work?

I think that we can assume that Zingo was a fairly competent carver. It seems unlikely that he would have claimed the stone as his own if he hadn't done more than rough out its shape. Two scenarios seem likely to me: 1) Zingo is responsible for the rough soul effigy and competent lettering, but not the elegant border scrolls, or 2) Zingo is responsible for all of the carving on the stone. Scenario #1 is plausible — perhaps he took charge of a blank with pre-carved borders.

The reason I think scenario #2 is compelling is that border carving could easily be "staffed out" to Zingo or another carver other than the shop's master in order to free John Stevens himself for detail work. This border pattern is very common on Stevens shop stones, and could have been perfected by a decent carver through repetition. Furthermore, it would make sense for a non-master carver to "rough out" a face, but not be able to finish the details with confidence. I don't mean to imply that Zingo Stevens was a poor carver — his letters are much better than many rural carvers — but it seems that he was not as accomplished as John Stevens.

A few other stones, notably the Quash Dunbar stone (1770) have this same combination of beautiful borders and rough tympanums/letters, and can be reasonably attributed to Zingo Stevens. 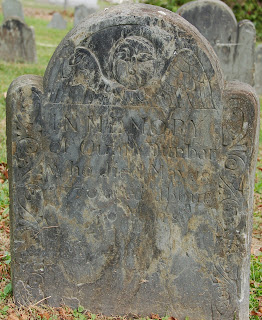 Some have attributed the stone dedicated to Zingo's wife, Phillis, and their son, Prince, to Zingo Stevens. Roy Hilbinger writes that "Zingo Stevens was employed to carve the stones of Newport's African-American community, both slave and free. He specialized in portrait stones, and often his portraits incorporated African motifs" such as a checkerboard design similar to Kente cloth. I think that this interpretation is unlikely. The "portrait stones" that Hilbinger attributes to Zingo postdate the Cuffe Gibbs stone by 4-5 years, but the carving is nothing like Zingo's signed work. The intricate relief carvings are typical of John Stevens' own work, which can be seen on the Nathaniel Waldron stone (1769). 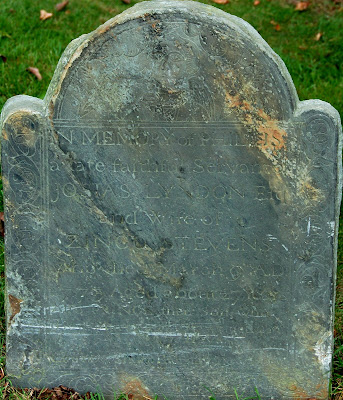 I think that the truth is more complicated (and more interesting) than Hilbinger implies. Rather than John carving stones for white residents of Newport and Zingo carving stones for black residents, both were responsible for work that appears in both sections of the graveyard. It is, perhaps, uncontroversial to observe that John Stevens was responsible for many of the gravestones dedicated to Africans and African Americans — Forbes argued as much in 1927. It is similarly obvious that Zingo Stevens did some carving — his signed work is some of the earliest American sculptures attributable to an identifiable African-American artist. What I have yet to find is someone taking the logical next step and arguing that Zingo Stevens is responsible for at least some of the carving, not just of gravestones belonging to African-Americans, but on many of the Stevens shop stones. Perhaps he carved the border for Hart Cranston Dunbar's stone (1762), which is nearly indistinguishable from the border on the Cuffe Gibbs stone. 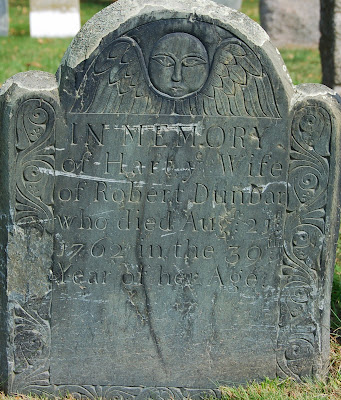 This is an intriguing possibility. Scholars have long recognized "God's Little Acre" — the African-American section of the Newport Common Burial Ground — as an important historical site. If we could prove that Zingo Stevens had a hand in carving these other stones, the whole graveyard becomes a gallery of his work. It is probably impossible to attribute specific border carvings, particularly in such a large and busy workshop, but I think that there is enough evidence to accept the proposition provisionally.

Now what I want to know is who carved the Prince Stevens stone (1759)? The lettering and border could be Zingo's — did he carve the face, too? 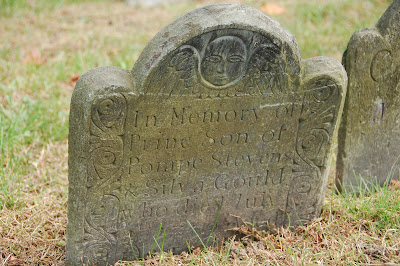 Posted by Caitlin GD Hopkins at 12:18 AM