I'm not generally squeamish when it comes to graveyards, but this epitaph, despite its economy of language, evoked an extremely unpleasant mental image. I suppose it isn't so bad in context, but I didn't remember the whole epitaph — only that phrase stuck with me.


The human form
respected for its honesty
and known 53 years
by the appellation
CHRISTOPHER ELLERY
began to dissolve in the
month of February 1789. 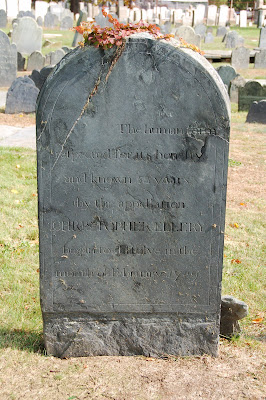 How very peculiar. I don't know the Newport cemeteries to know what's usual and what's not, but that one must have some kind of special religious significance, no? Maybe the fellow was a spiritualist or something. And with no actual death date?

Rhode Island is a strange and wonderful place. This stone is unusual for the Common Burying Ground, but there's a lot of odd stuff there, which I will be posting as I get the chance.

According to various issues of the Newport Mercury, Christopher Ellery was a ship's captain who served as a justice on the Court of Common Pleas later in his career. He was also Secretary of the Newport Marine Society. The Newport Herald's short epitaph (published 2/26/1789) says that Ellery "was of a frank and generous disposition, and in his public and private capacity conducted himself with strict integrity."

Ellery was from a very well-connected family: his father, William, was the deputy governor of Rhode Island, his brother (also named William) signed the Declaration of Independence, and his second son (Christopher Jr.) became a U.S. Senator. They seem to be related to William Ellery Channing, though I'm not sure exactly how.

I agree — this epitaph implies somewhat unorthodox religious beliefs. I don't think he would have had time to influence little William Ellery Channing, who was only nine when Christopher died. Still, maybe other members of the family were similarly unusual in their spiritual thinking.