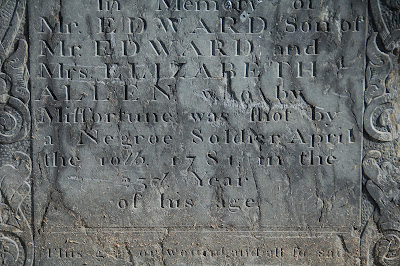 This one is actually pretty interesting. I didn't go out looking for this stone — I just stumbled upon it — but it turns out to be a fairly well known story.

According to John Wood Sweet in Bodies Politic: Negotiating Race in the American North, 1730-1830 (2003), Edward Allen was the son of widow who lived in an economically marginal and racially diverse neighborhood. On the night of his death, Allen and a companion named John Pitcher attacked the barracks of the First Rhode Island, a regiment which included segregated companies of black soldiers. Neither Allen nor Pitcher served in the Continental Army, and Sweet argues that they were "assaulting the dignity and legitimacy of black soldiers," challenging the soldiers' honor in order to undermine the claims to freedom and citizenship implied by their service.

When Allen and Pitcher graduated from throwing rocks to breaking down the door, the soldiers defended themselves. Prince Greene (identified in newspapers as Peter Greene, and probably connected in some way to the regiment's commander, Christopher Greene) confronted the assailants with a loaded musket and shot Edward Allen in the head. Though tried for murder, Greene was found guilty of manslaughter, and branded with an "M" on the hand. The brand was not Greene's only war wound — he rejoined his regiment after the trial and lost all his toes to frostbite during the Oswego expedition of 1783. 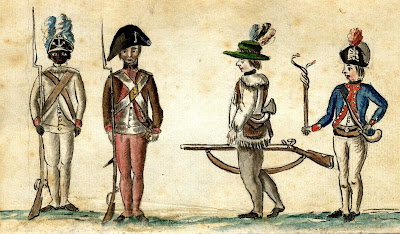 This watercolor (by Jean Baptiste Antoine de Verger) shows some of the American troops at Yorktown. The African-American soldier at left is from the First Rhode Island. Note the anchor on his hat. The original watercolor is in the Anne S.K. Brown Military Collection at my alma mater, Brown University.
Edward Allen's gravestone in Providence relates a highly biased version of the incident:
In Memory of
Mr. EDWARD Son of
Mr. EDWARD and
Mrs. ELIZABETH
ALLEN who by
Missfortune was shot by
a Negroe Soldier April
the 10th 1781 in the
23d Year
of his Age.
(The verse at the bottom has been mangled by a lawnmower, but it includes the word barbarously.) 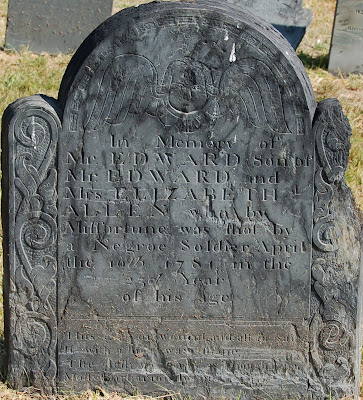 In addition to absolving Allen of any blame by casting him as the passive victim of "misfortune," Sweet points out that the identification of Greene as "a Negroe Soldier" attacks "what he represented about military manhood and white identity."

I wonder who helped pay for this monument. If Allen's widowed mother really was destitute, she could not have afforded it on her own. Did she have a wealthy friend who wished to commemorate Allen as a heroic young man and cast Greene as a rogue? Perhaps. But I can't help but notice that this stone comes from the shop of George and Gabriel Allen — that may not be a coincidence.
Posted by Caitlin GD Hopkins at 6:01 AM