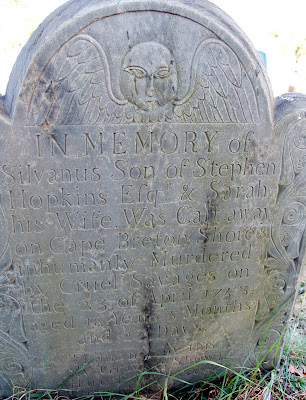 In Providence, there is a cenotaph dedicated to Silvanus Hopkins, son of Stephen Hopkins, a young man who met an unfortunate end:

IN MEMORY of
Silvanus Son of Stephen
Hopkins Esqr & Sarah
his Wife, Was Cast away
on Cape Breton Shore &
inhumanly Murdered
by Cruel Savages on
the 23 of April 1753.
aged 18 Years 5 Months
and 23 Days.
Think not by this,
My Grave is Shown
Hard Fate Decreed,
I should have none.
I haven't been able to find much information on the incident, which is puzzling. It seems that someone in the 19th century would have picked up this story and turned it into a saccharine, racist poem. One of the only accounts I could find is from New England Families, Genealogical and Memorial:


[Captain Thomas Kilton] was a mariner, and in 1753 a vessel in his command was wrecked during a gale on Cape Breton. The unfortunate seamen were washed ashore and no sooner reached land than they were captured by savage Indians and massacred. There was but one survivor of this wreck, the mate, living to tell the sad story. Among those who were killed was Sylvanus Hopkins, son of Stephen Hopkins, one of the signers of the Declaration of Independence. 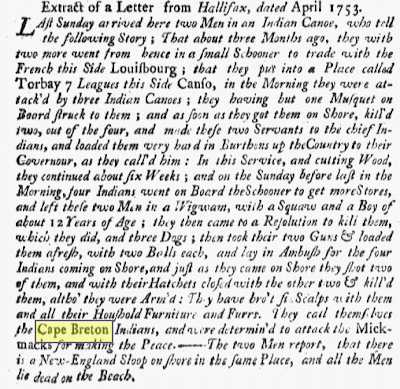 Posted by Caitlin GD Hopkins at 6:10 AM

Here is another stone which looks almost identical!

It's a classic William Stevens stone. You can tell the difference between William and his brother, John Stevens II, because John's letters are narrower, while William's are more rounded.

I'd be very interested in coming to Long Island and seeing which New England carvers sent their stones there.

Mattituck is the only Long Island town/cemetery I've visited since I live in Queens and don't have a car. My friend decends from early Mattituck families and I tagged along for a road trip. I've also been to Greenwood in Brooklyn, which has many famous residents. I didn't notice slate stones, which are my current interest, but the section of 1700s and earlier is probably very small and it is a huge cemetery. I'll have to do some local graveyard research.

Please let me know if you plan on coming this way as my Mattituck friend and I love to walk old grave yards.