When people poke fun at the Boston/Rhode Island family of accents, the "conservation of rs" problem gets a lot of attention (cah vs. car: non-rhoticity and idear vs. idea: intrusive R). Undoubtedly, this is one of the most easily recognizable linguistic quirks of the region.

A subtler characteristic of southern New England speech is the routine dropping of ds and ts. I have no idea what this is called, but it seems that speakers of other American accents have a similar habit. Dropping ts and ds is much more common than full-blown non-rhoticity.

Why do I care? Gravestones, of course: 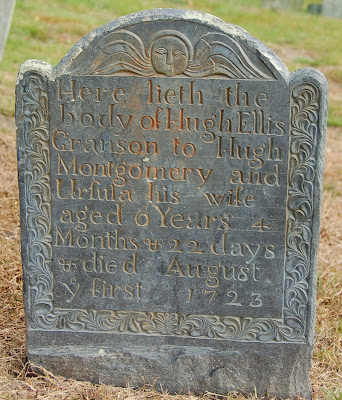 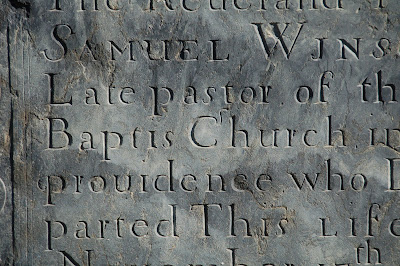 Samuel Winsor, Providence, RI (1758)
"Baptis"
also, potentially, "Winsor"
I don't know how other people pronounce this, but I would pronounce "Windsor" as "Winzzer," as in "South Winzzer, Connecticut." Was he Samuel "Windsor" or "Winsor"? This book says "Windsor." 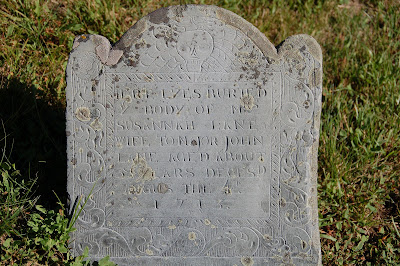 Susannah Lane, Billerica, MA (1713)
"Augus"
These may be coincidences, but I'll be on the lookout for more d/t irregularities from now on.
Posted by Caitlin GD Hopkins at 5:12 PM

Hmm, I do believe that that Major John Lane is my 7th great uncle. Glad to see his stone is holding up well.

It is in pretty good shape, though, if I remember correctly, some of the ballast is exposed and it is leaning a bit. It's in the South Burying Ground in Billerica.

Major John Lane was the son of Job Lane, the immigrant ancestor of this line. He is mentioned in Forbes (p. 52) because his daughter Anna (who would have been a sister of Major John) married James Foster of Dorchester, the first of the Foster stonecutters. Job Lane's stone (1697) is apparently in Malden, and Forbes says it has a Foster-style head although other elements are unusual. (She unfortunately doesn't illustrate it.)