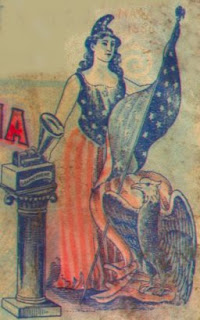 Name of the day:


Columbia Tingley
Columbia Tingley was born on March 15, 1792 in Cumberland, Rhode Island. I love his name because it is such a perfect example of exhuberant patriotism in the Early Republic. What better way to celebrate the new nation than to name your baby "Columbia"?

Columbia's father, Benjamin Tingley, was an officer in the Revolution. I wonder whether he was a Federalist in notoriously anti-Federalist Rhode Island.

So Science spreads her lucid ray
O'er lands that long in darkness lay;
She visits fair Columbia,
And sets her sons among the stars.

(nope, just the link I guess)