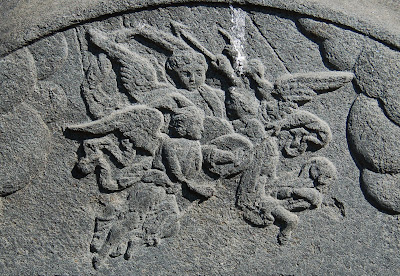 Providence gravestones are not like Boston gravestones. I would be surprised if there are more than ten death's head stones among the thousands at North Burial Ground. The Sarah Antram stone (pictured below) is a good example of the fine quality of carving in Rhode Island (even when the stone quality is not quite up to Boston standards).

Here lies ye Body of Sarah Antram,
Daughter of Major Thomas Fenner & Wife
of William Antram; by whom he had
7 Children 4 of which surviv'd her, &
rise up & bless her Memory. Proverbs,
Chap. 31, Verse 23 28.
She was a Careful Loving Mother;
A Desirable Neighbour;
And a Prudent Wife.
She rested from ye Pains & Sorrows of this
Life April 17th 1736, in ye 39th Year of her Age.
He hath destroyed me on every side, & I am gone: & mine
Hope hath he removed like a Tree. Job Chap 19, Verse 10. 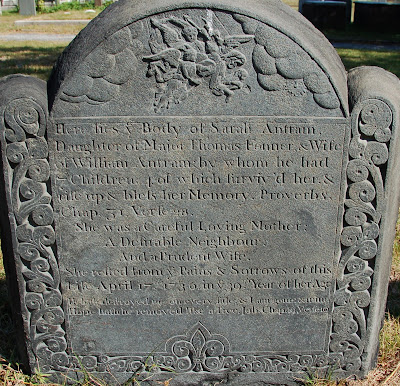 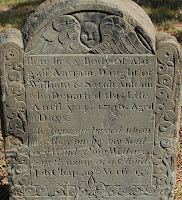 At first, I was skeptical about the date on this stone (1736), but there are several other, less elaborate stones from the 1730s with similar borders. I can't compare the tympanum design because I've never seen anything like it before.

The Abigail Antram stone (left) has a similar border and design at the bottom center, as well as a citation from Job. Two other daughters, Anne and Amy (who died in September of 1735 and January of 1736), are buried nearby. Perhaps their deaths explain the Job references.

There are other, non-Antram stones with this carving style from the 1730s, so I'm fairly confident that Sarah Antram's stone was carved soon after her death. If so, it is one of the most exquisite stones from this era I've seen outside of Boston.

Update: In James Slater's The Colonial Burying Grounds of Eastern Connecticut and the Men Who Made Them, stones very similar to these are attributed to George Allen. Identifying features include the bald head, lobed wings, and lily borders. Although Slater does not give a date for the beginning of Allen's career, one of the photographs used to illustrate Slater's style is from 1743. Slater calls Allen and his son, Gabriel (b. 1743), "master craftsmen of the first order" (Slater, 110). 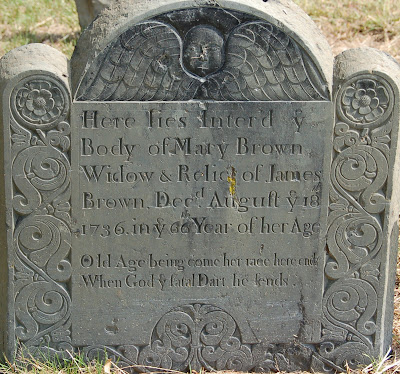 Posted by Caitlin GD Hopkins at 6:06 AM

Several interesting things there. I've never seen the phrase "widow & relict" before. Is there a difference between a widow and relict, or is it one of those early English legal formulae where the same word is given in Norman and Saxon forms?

A typo: the Proverbs verse is 28 rather than 23. That same one appears on a stone in Fitchburg; it was probably common for dutiful wives.

The Job verse seems to be the husband-left-behind speaking. Is that how you would read it?

Thanks for the correction. I've updated the post and added a little bit on George Allen, the artist most likely responsible for these stones.

I hadn't even noticed the "widow & relict" phrase, but now that you point it out, I don't think I've ever seen it on a gravestone before. Someone in Britain has found a similar case. You may be right about it being legal language - I found several examples of the phrase in legal documents.

I think it's reasonable to read the verse from Job as the husband's voice. It is certainly appropriate, especially given the number of children he lost in a single year, along with his wife.

I'm getting more of an education in the Old Testament just by looking up these gravestones than I ever got in Confraternity of Catholic Doctrine class.

Legal formulae are often like living fossils, persisting unchanged for centuries while the rest of the language evolves around them. As I recall, one source of a number of these formulae in English was the merging of Anglo-Saxon and Norman legal traditions after the Conquest, with lawyers developing the habit of covering themselves (and their clients) by using both the Saxon and the French terms in a document so there could be no chance for ambiguity. I believe this is how we came to have "will and testament," "breaking and entering," and several others. Perhaps "widow and relict" is such a pair.

In regard to the voice speaking, I wonder if there's a slight gender correlation with whether the stone is speaking in its own voice (as I am now so you shall be) or in the voice of another (my hope [i.e. the hope of the survivors] He hath removed). It's probably subtle, but I wouldn't be surprised if it is there.