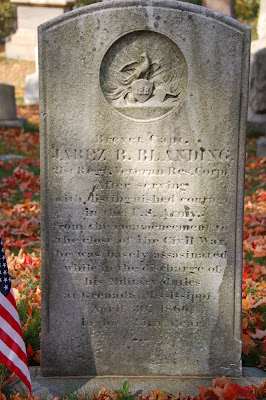 Brevet Capt.
JABEZ B. BLANDING,
21st Regt. Veteran Res. Corps.
After serving
with distinguished courage
in the U.S. Army
from the commencement to
the close of the Civil War,
he was basely assassinated
while in the discharge of
his Military duties
at Grenada Mississippi,
April 30, 1866,
in his 25th year.
Blanding served with a unit attached to the Freedman's Bureau and tasked with "protecting the citizens [of Mississippi] from outrage." Though a report to the House of Representatives states that the murderer was "well known," as far as I can tell, he was never arrested. 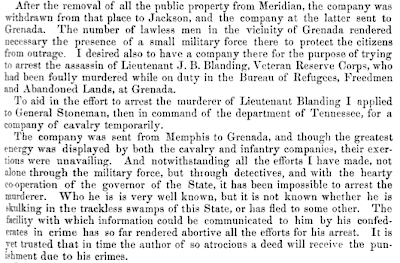 Posted by Caitlin GD Hopkins at 8:08 AM