When I think of columns on gravestones, I generally associate them with the post-Revolutionary War move toward neoclassical motifs. Imagine my surprise at finding so many "neoclassical" columns on Newport gravestones dating from the 1720s and 1730s! I can't be 100% certain, but these stones do not look like they were backdated, at least not by more than a few years. Perhaps there is something to be said here about carvers who were working from European pattern books or who had originally done some architectural work. 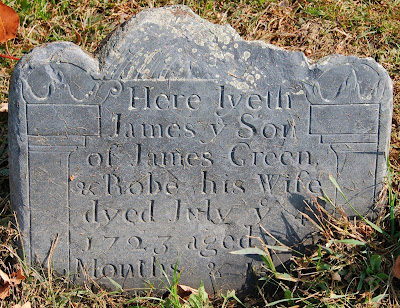 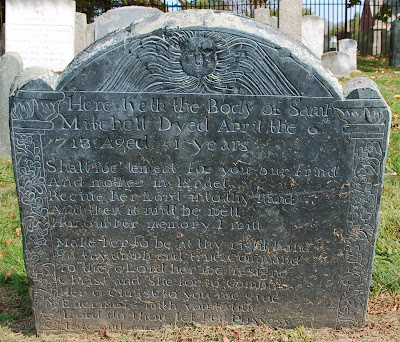 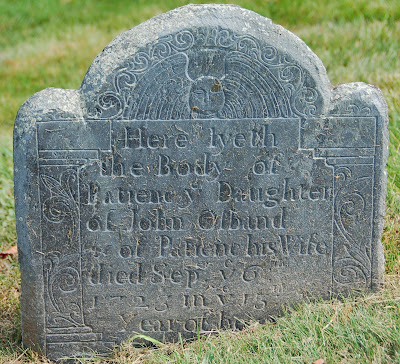 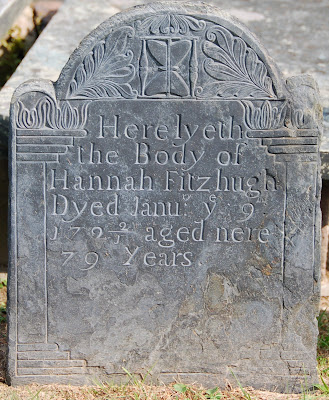 Hannah Fitzhugh, Newport, RI, 1721/2
ruled columns, organic fronds, curvy hourglass
All four of these stones appear to be the work of a single carver, possibly one of the Tingleys (see Forbes). I've been calling him the lion head carver because some of his distinctive soul effigies remind me of lions: 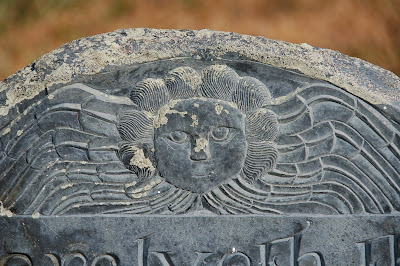 Samuel Tingley and his descendants (many of whom are also named Samuel) were from the Attleborough/Providence area, not from Newport, and few of their stones appear in Newport after 1730 or so. The chronology I've been able to cobble together goes something like this:

Before 1700, Newport was part of the Boston gravestone market. Most of the handful of stones in the Common burying ground from the 17th century are Boston-area slates: 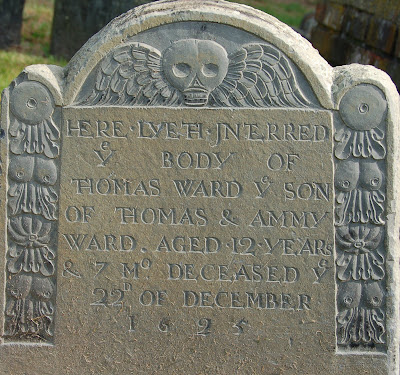 There are a handful of stones from the 1650s and 1660s that are unlike anything I've ever seen in New England. There are only a few of these and I'm not entirely sure they weren't imported from England: 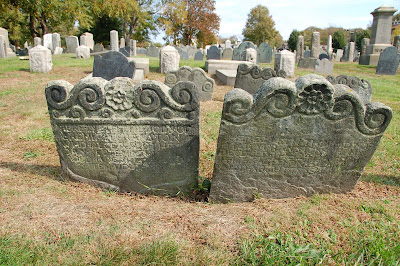 In 1705, John Stevens I started producing gravestones. They were of dubious aesthetic quality, particularly for people who were used to Boston standards: 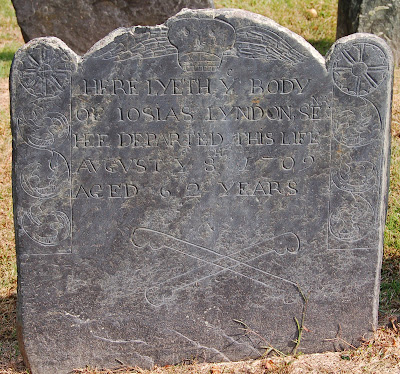 This is where the Tingleys come in. I'm speculating here, but it seems that people wanted something of higher quality than the early Stevens stones and found the Tingleys more acceptable. I do not know why they stopped buying stones from Boston.

By the late 1720s, there was a new carver in town: John Stevens II. His work was much more refined than his father's and (I suspect) convinced customers that there was no need to go to Providence when they could get quality stones in Newport: 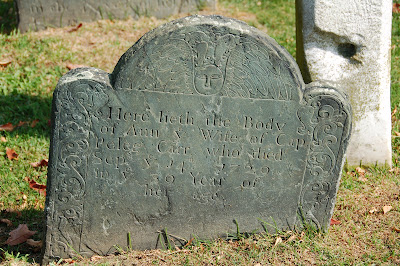 This is a curious reversal — I'm used to thinking of Providence as the backwater and Newport as the cosmopolitan port city. That would prove true later in the 18th century (in gravestone quality, at least) as John Stevens II matured and fostered the artistry of John Stevens III and John Bull.

Posted by Caitlin GD Hopkins at 11:11 AM

Lots of very interesting things there. The columns look like something a person would draw if he remembered seeing columns, but didn't actually have a picture in front of him. The capitals in particular look like they were made by someone who vaguely remembered that the Corinthian order had leaves at the top in some kind of (uncertain) arrangement.

I remember having see the strange spidery wings of the Patienc Osband stone before: Forbes suggested they were John Stevens' work, but wasn't sure (see facing p. 75).

The early stones with the scroll tops are quite interesting also -- almost look like they were designed by a cabinetmaker used to building highboys. The material looks coarse; if it's reddish it could be the Connecticut Valley sandstone that was used by many carvers.

Incidentally, there are a couple of interesting clips about the John Stevens Shop on YouTube:

Thanks for the videos. When I was an undergrad, my professor invited Nick Benson from the Stevens shop to come to our class and demonstrate his technique. It was amazing — he cut gorgeous letters so deftly.

Those scroll-top stones are still bothering me. They're so early and so unusual. I'm going to be in Newport again in a few weeks — I'll go back and see if I can take better pictures and decipher the epitaphs.